SDI signal transport was always a topic of discussion for broadcasters I have spoken with over the past many years.  Customers had cable trays FULL of coax cable.  Fiber was known to have many benefits with signal quality, distance, and flexibility, but was expensive, brittle, and delicate according to majority.  An electric bayonet style connector was THE preferred choice of interface.  Running longer than 800m distances for floor-to-floor or campus-to-campus applications over copper was almost impossible without reclocking repeaters. Helping to introduce cost effective and simple ways to use fiber for transport in Broadcast and Media has been the Embrionix focus.

What is the meaning of the term Dark Fiber?

Dark fiber is referring to the absence of a light photon (signal) source transmitting over the fiber.  Lit fiber has a light source (or signal) present.  Fiber has been used since the 80’s in Telecommunication, for multi-Lambda (wavelength) distribution of Telephone and Data communications.  Remember DS3, T1, OC-48, and STM?  Data rates such as these had lower requirements compared to todays standards, but the issue of capacity and multiple signal support was addressed using a combined TDM + Optical Multiplexing topology.  This concept was also used to help develop greater capacities for the broadcast world. 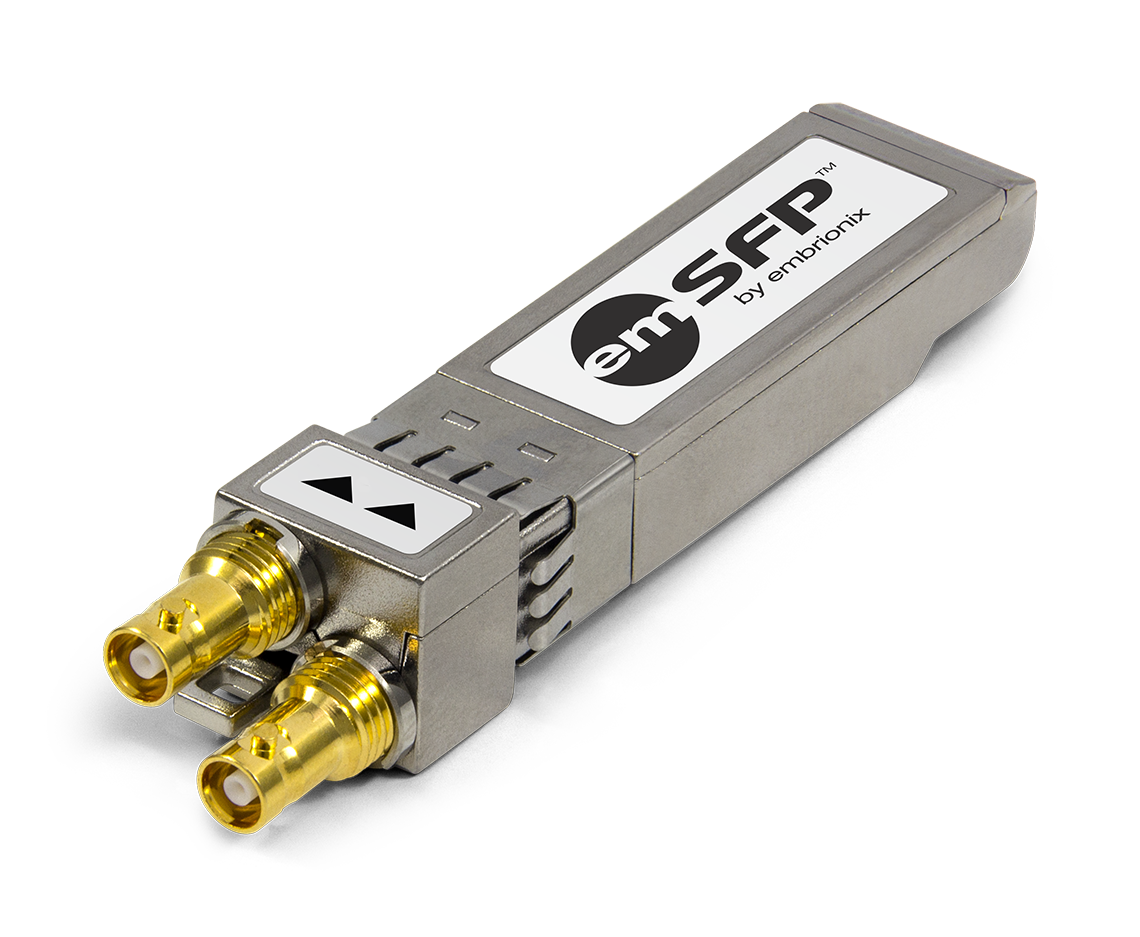 At every stage of transition, a logical onset of questions arose with sometimes redundant feedback.  This could be viewed as positive or negative.  “How are we going to handle these data rates?”  “Need to compress and type of compression?” “what is the reliable distance over coax?”  “Am I losing signal quality?”

For SD-SDI, standard 1310nm type lasers was an excellent balance of cost and performance.  Even in todays standards, it is the best bang for the buck.  Point-to-point transport of Video using 1310nm lasers was the first steps.  Electrical to Optical (E2O) on one side, and an Optical to Electrical (O2E) on the other side. Modular cards or 1RU units produced a digital point-to-point transport with 1 signal per fiber.

The distance hurdle was overcome.  Customers could transport video audio and data on campus or within a building (Intra facility), as well as move across the city over leased dark fiber for wider area distribution (Inter-facility).  Single-mode fiber gradually came down in cost and matched coax over the years.  Tactical fiber and advances in Fiber jacket, cladding, and connectors greatly improved durability and allowed customers to take fiber into more rugged conditions such as a battlefield, oil drilling, and police surveillance.

The next step was capacity, meaning how can a customer put more than one signal per fiber.  1310nm lasers were low cost and addressed the distance needs of many.  A Bundle of 24, 48, or 96 fiber cables required the same diameter space as a pencil, but having one video signal per fiber still posed limitations.

TDM (Time Domain Multiplexing) allows signals to be multiplexed in the electrical domain.  For example, on a 10Gbs laser, 6 x 1.485Gb HD-SDI signals can be TDM’d together, increasing capacity per wavelength from 1 video to 6.  This takes a lot of processing and hardware, but less optical components.  Compression also increases capacity in the TDM example, but again, more FPGA’s, more hardware, more power.

Optical Multiplexing was the most cost effective and simplest approach to increase capacity of video transport over fiber without compression and manipulation of the source signal.

There are 2 types of Optical Domains that are used for multiplexing or combining signals.

The optical Multiplexers and De-Multiplexers for common broadcast applications are passive devices.  Graded prisms at the core of the Mux and DeMUX separate and combine the light of different wavelengths, not limited to signal type, data rate, or direction of each wavelength.

This topology gave broadcasters the distance and capacity needed to move multiple SD-SDI, HD-SDI and 3G-SDI signals over existing or new Dark fiber.  Each wavelength capacity was dictated by the type of Laser and Receiver modules used.  As an example, with 3Gbs lasers/receivers, 16ch of 3G-SDI uncompressed video/audio/metadata (48Gb) could be moved across a single fiber.  CWDM and DWM lasers (DFB lasers) increased optical power output in comparison to 1310nm FP lasers, allowing for up to 80km of transport distance. Here is an example of a simple 16ch CWDM system combining Video and Ethernet transport over a single fiber. 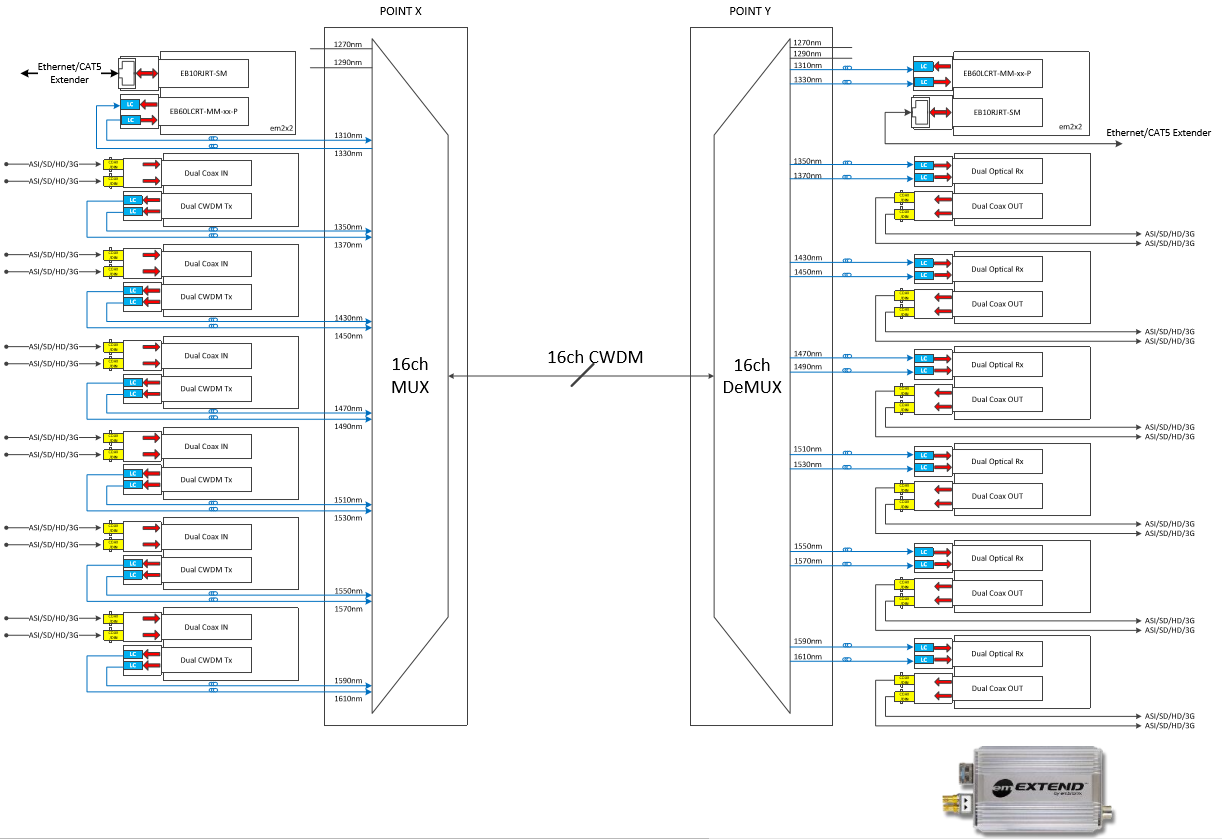 Again, signal type is not limited to Video only.  Each wavelength is independent of the other in signal format, as well as direction, and capacity.  Passive optical Multiplexers and De-Multiplexers are bi-directional, and allow for signals to travel in both directions.  They also have very high bandwidth capacity per wavelength channel due to their passive design, meaning well above 12Gb/s rates.  The Laser and Receiver modules dictate the signal rate or data rate.  If the optical laser and receiver support 10Gbs, then you would have 16 x 10Gbs, providing a capacity of 160Gbs over a single fiber. This is using simple off-theshelf products to move the highest quality, and highest capacity for the money.


Lets fast forward to today.  Broadcasters prefer high quality, minimal delay, and lowest cost solutions. This is the holy grail.  Sacrificing quality for cost is not an option.  High MTBF for minimal failure rates.  Simple configuration with expandability and flexibility.  Electrical to Optical converters for 4K Video, Audio, MADI, HDMI, or IP are all available using Embrionix SFP based solutions.


Here are some Pros and Cons for modern Dark fiber applications in relation to the topic of this paper, 12G-SDI transport: 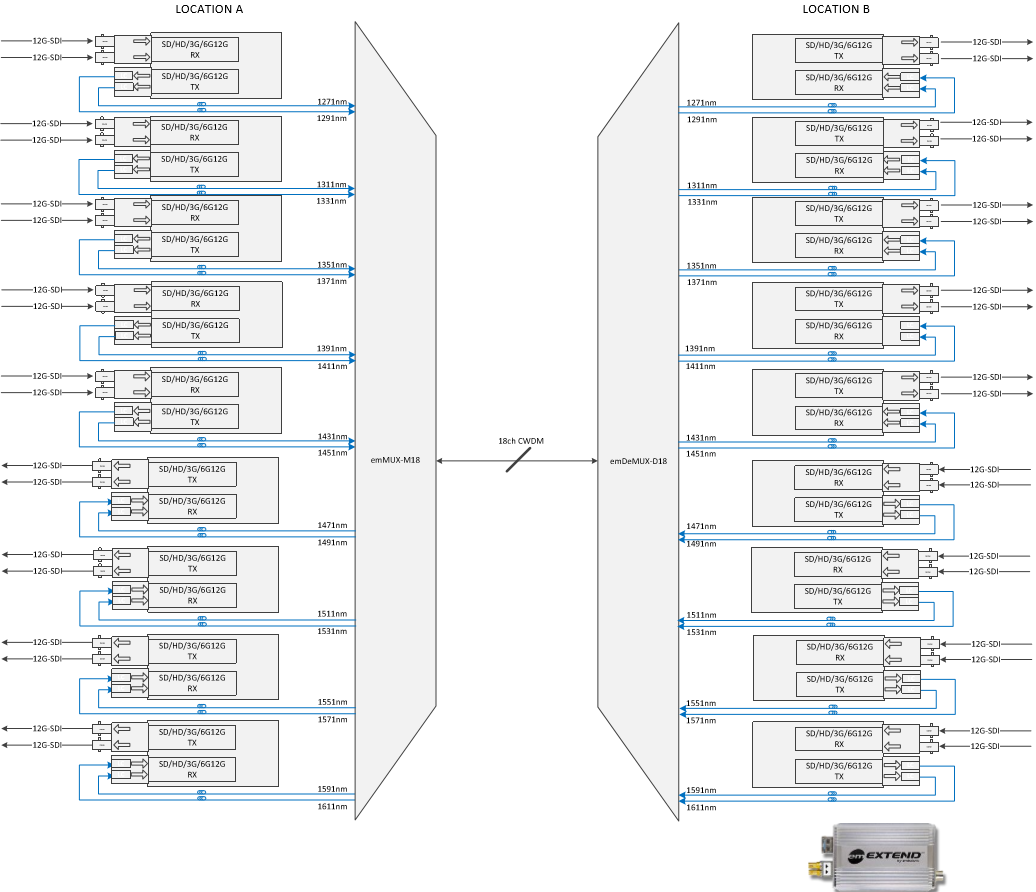 I wanted to outline these trends to perhaps identify a commonality. Majority of broadcasters and media facilities have Singlemode fiber installed. Most have optical Multiplexers and De-Multiplexers already in their systems as well.  With Embrionix SFP modules, 12G-SDI Coax and Optical SFP modules bridge the gap for todays higher resolution/frame-rate video requirements.  SFP’s are compact, low cost, and require minimal power. The infrastructure concepts have not changed, only the E2O and O2E end points.  If 4K transport within the facility or on a campus is a requirement, please contact us, and we can put together some system designs and information for your application.  Embrionix is a manufacturer of advanced SFP’s which support majority of todays IP standards products, as well as optical Dark Fiber requirements. For more information please feel free to contact us at sales@embrionix.com